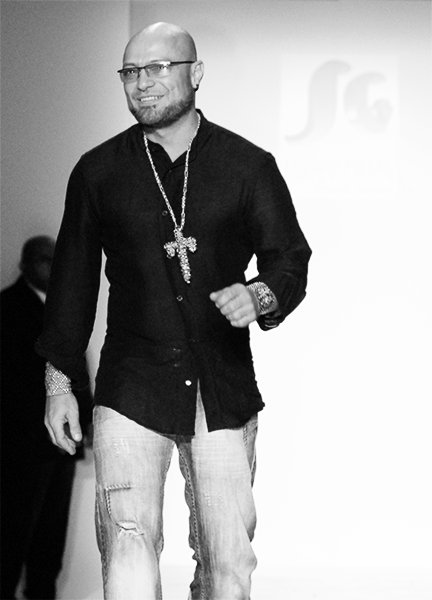 Sergio Gutierrez was born in Colombia. He studied electronic engineering while living in Medellin, Colombia. In 1991 he moved to San Francisco where he began researching ways of using ball chain to create a mesh like fabric. After two years he developed what is now the basis of his Liquid Metal Mesh line of jewelry and accessories.

In 1994 designer Betsy Johnson was the first who approached Sergio about creating exclusive designs for her chain of retail stores. She carried his line for two years.

In 1996 he relocated to Miami. Soon thereafter his company began growing with the addition of Nordstrom, Bebe and Cache to his client list. Sergio’s creativity and dreams for his business continued. He developed techniques for incorporating his Liquid Metal Mesh with leather bags, bracelets, belts and jackets along with jeans, pants and skirts.

In 2003 he was granted a patent for creating a unique technique he named, “Liquid Microchip”. Electronic circuitry components have been altered to resemble the most delicate intricate decorative elements. Sergio fondly refers to them as the “skeletons of today’s inside technology”. These “skeletons” are incorporated into his mesh objects collection and leather items.

His designs are collected and worn by celebrities such as:
Demi Moore, Cher, Patricia Wettig, Marilyn Manson, Sara Michelle Gellar, Tony Braxton, Sharon Stone, Thalia, Tyra Banks, Julie Warner and many more. People who wear his jewelry and accessories daily as if they were an extension of themselves, value the comfort and uniqueness of the wonderful mesh designs Sergio has created.